The direct flight from Belfast to Bordeaux was a relaxing journey. In fact it was so relaxing that we didn't hurry ourselves off the plane which meant that we were among the last to go through passport control and into the baggage reclaim area. It seemed unusually quiet and I noticed that not only was the tapis no longer rolling but our bags were nowhere to be seen.

Language in the baggage area

Now since one of the main ideas behind this trip was to brush up on my French I went with the flow and decided to ask some of the customs and security personnel for help. They directed me to a phone and I explained to a sympathetic member of ground crew staff that our bags were missing. She invited me to come over to another section of the airport to fill in the necessary paperwork.

I did notice one bag still left on the rolling carpet but it wasn't ours. The Belfast sign went out.
What if the bags had been placed on another rack.  Sure enough, at the back of the baggage area were two lonely cases. Relieved, we claimed them and offering thanks to those who had helped us made our way outside.

There waiting was a Bordeaux bus. A fare to the city centre was very good value, approx €1,50 each.
Way to go!  A long way to go.  Had we known or planned better we could have got off at Merignac school and switched to the tram.  One of the stops on the line was 3 minutes on foot from our destination, an AirBnB near Gaviniès. But of course we didn't and as it was early enough in the day it was nice to see some sights and get our bearings.  How lovely to pass Le Musée des Beaux-Arts, where I had visited a Surrealism exhibition back in the summer of 1971 and what pleasure to arrive at the Gare Saint-Jean and see across the road the Hotel Regina. 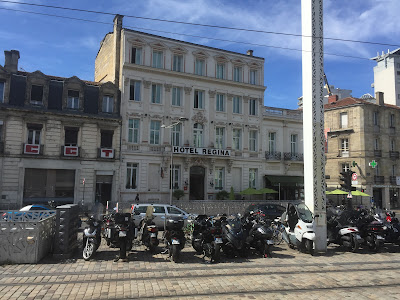 Back in that summer of 1971, as a young student teacher, I had a placement as a moniteur in a holiday centre for youngsters from Bordeaux.  I arrived in the city exhausted and too late to meet my lift that was to take me out to the centre at Martillac. I walked across the road and booked into this hotel making a huge dent in the pocket money that I had brought to see me through the month.  On top of that the weather then was hot and humid and I spent most of the night trying to stay cool in the shower.  That memory and this hotel has stayed with me through the years.


The bus had set us down at the train station but the tram service was disrupted for major and indeterminate improvement works. We knew we were going to have to get a taxi but needed a bite to eat first.  Paul is a pastry, hot-food business that we've appreciated wherever we have come across it and so a couple of goats cheese and courgette tourtes with some coffee went down a treat. Then out onto the concourse for a taxi.
Our chauffeur was an interesting and chatty Bordelais. He explained the recent public works, the street system and parking permitted on both sides of one way streets to slow down the traffic. It was clear he was proud of his city.  And that language was coming back.

Our AirBnB hosts texted us info on where to find the keys for the apartment. This was our first ever stay in an AirBnB and while it was not by any means hotel standard I liked the authenticity of staying in a typical apartment in a suburban street of a French town.  Families were going about their business, workers were in nearby cafés and we spotted a couple of local restaurants and a supermarket.


That Line A tram was very close and the city itself a good half hour walk away. But Day 1 was to get settled in.  That little restaurant on the corner looked just right.  Did I need to book?  La patronne thought it would be better if I did and asked me my name.
"I'll reserve a table for you outside," she said.
And she did...
We were back in Bordeaux. 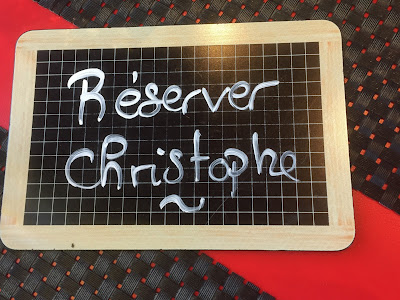