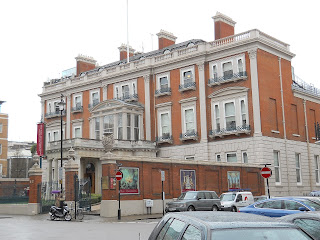 A light rain made us hurry our steps up Bond Street, past the tempting array of small restaurants and into Manchester Square to Hertford House, home of the Wallace Collection.

We had learned much about Sir Richard, son of the fourth Marquess of Hertford at various events organised by the Richard Wallace Trust (Lisburn) and this was our first time at his London home. We recognised the building immediately as it bears very close resemblance to his home, Castle House in Lisburn, now occupied by the South Eastern Regional College.

Another clear sign was the presence of a Wallace Fountain to the right of the entrance. We had arrived. Inside, what struck most was the sumptuous elegance of the place. A gorgeous red carpeted staircase with marble columns on each side. We went upstairs leaving the armoury collection for another time. There were several galleries. Art everywhere. And left to us as a philanthropic legacy. Wow!
Boucher's The Rising of the Sun (1753) caught my attention and kept it! Then I discovered the treasure of Ruben's Rainbow Landscape (1635). The Laughing Cavalier (1624) by Franz Hals had been the subject of a hugely expensive bidding war between Sir Richard and the Rothchilds. We won!

The Wallace Collection is a very visit-able gallery. Compact enough for a short tour but large enough for sustained and lengthy inspection. We only had a couple of hours and had promised ourselves a visit to the courtyard restaurant and cafe for a pot of tea. It was an elegant and leisurely affair. Indulgent? Sure, but not extravagant. We had refreshed our imagination in the galleries and now it was time to satisfy the sense of taste. We left reluctantly.

It was a long overdue first visit.

We will go again soon and stay longer next time.