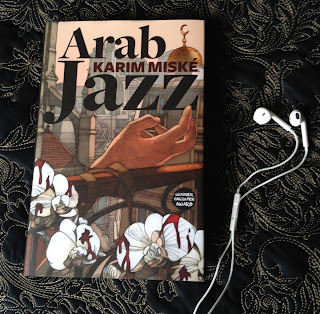 
Arab Jazz is Karim Miske's first novel and it got me hooked from the word go.

I am a fan of detective fiction and although books are not supposed to be judged from their covers the artwork on this one was particularly a propos. The blend of religious symbolism on the cover cleverly suggests the interplay of cultures and that's just what we get.  The scene is set with a tethered hand, blood-stained orchids - here is a murder on a Parisian balcony.  For a little more information on the storyline check out the Maclehose Press page here.  No spoilers.

Notice that in my picture of the cover, I have added a pair of earphones.  That's because the novel is supplemented with a playlist.  Karim Miske is also a film maker and it's the first time I have come across such a technique in a book. I was a good bit through before I went in search of the tracks and they are all on iTunes.  Do you know what? It works!

Some of the items are not quite to my taste but they certainly convey the mood and I thought it was fun to have a soundtrack and book reading going hand in hand.  I used technology in another way.  The author conveys a real sense of place - especially so of the culturally mixed 19 arrondissement in Paris.  It was so very well constructed at times that I typed in the locations on a mapping app to see where exactly the characters were and where they were going.  That's the first time I've done that as well...

And what of the literary merit?
Well let me point you in the direction of the Guardian's book review here.  It says plenty and is worth a read.  The book has been well received and has picked up awards in its original French and also in English.  I was interested for example to follow up on the cover blurb stating that it had won the English Pen award.
What, I wondered, is English Pen?  A little detective work revealed an organisation that in its own words, "works to defend and promote freedom of expression and to remove barriers to literature."  You can learn more about English Pen here

The author has been doing a round of book discussions and it's great that Belfast is one of the venues.  The 2015 Belfast Book Festival takes place in June and Karim will be in conversation with Malachi O'Doherty at the Crescent Arts Centre on June 9.  I have the tickets ready and a question or two should the chance arise.  For event information click here.

I wonder if the organisers have thought about some music.  Arab Jazz maybe.