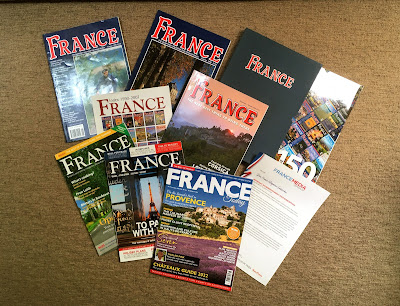 An old friend has left the magazine shelves - France - the magazine for Francophiles.  I collected it for very many years, since the 1980s and started becoming a subscriber with Issue 2.  Back then it was published four times a year and was a very collectible publication. You could even get slip cases to hold four issues, the series for a year.

Later it was published monthly and still managed to retain its freshness with new and interesting articles. While sometimes some features would recur they always had a different angle or approach.

Back then the magazine had competitions and I was lucky there on a couple of occasions winning some lovely French-themed books.  But my special win was a return Motorail package with ferry crossings between any two rail stations.  I opted for Calais to Nice return!

Eventually decades of issues built up and I decided on recycling and give aways. I have held on to several significant issues: The 150th offering and the homage to Paris edition following tragic events there.

FranceMag as it was affectionately known has now been absorbed within the France Media group's France Today.  It too is a superb offering and what I particularly like is the online information that forms a key part of the subscription package.  It is published six times a year but so far no sign of slipcases!

Au revoir France ! You were the next best thing to being there!