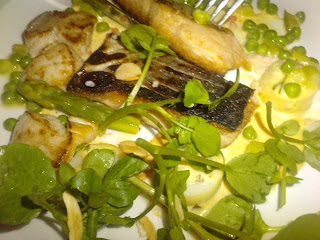 It has long been the custom in our family to celebrate Bastille Day and this time for the 14 July we had booked an evening meal in Bastille Restaurant, Belfast
We arrived to the sound of jazz music rising from the basement entrance and were warmly welcomed into the restaurant, under the canopy of a huge French flag suspended from the ceiling.
We were escorted to our table and were soon enjoying a welcome glass of fizz having been invited to choose our meals from the extensive à la carte menu.
We ordered and, fizz in hand, sat back to enjoy the atmosphere. Diners were in party mood and the place had filled up well. There was plenty of lively conversation, punctuated by the voices of a group of French people on a short visit to Belfast.

It wasn’t long before our starters of quail salad, with provençal olives and quail egg; and foie gras arrived. Senses heightened with the aromas, tastes and sounds, soon melted into . We continued with our main courses of seatrout and scallops; and monkfish with sweetbreads. Frites were pretty much de rigueur as was a bottle of Ropiteau L’Emage Merlot from the Pays d’Oc.
By this time, the restaurant was buzzing. A distinguished monsieur from the next table joined the jazz band to give a warmly received rendition of La Vie en Rose. It went down a treat.
Desserts arrived. These were a cheeseboard and some wonderful pruneaux à l’. We ate these according to the French custom by sharing the cheeseboard to finish the wine and then moving on to the pruneaux.
And then there were two firsts. The bar manager sent across a couple of glasses of Pousse Rapière, frappé style. Although the drink, from Gascgogne and based on is usually served as an apéritif cocktail, it worked perfectly at this stage of our meal. We decided to go for its fuller-bodied parent and two ballons of duly arrived.
e had now fully engaged with the French people at the next table. From somewhere a laptop with speakers attached appeared. It turned out to contain a playlist of backing tracks and le monsieur was back on his feet entertaining us with more Piaf and a rendition of Trenet’s La Mer.
Then came the second first. He serenaded ma femme with a song that I had not heard before. Later he explained that it was Souvenez-vous by Pierre Bachelet. A sad song of a war-torn France and quite lovely. You can link to it here.
e noticed staff taking down the canopy and carefully folding the flag. It was a gentle signal that it was time to go. And we did, taking with us some happy memories of a lovely Bastille evening in .
Publie par Unknown - mercredi, juillet 21, 2010 Aucun commentaire: 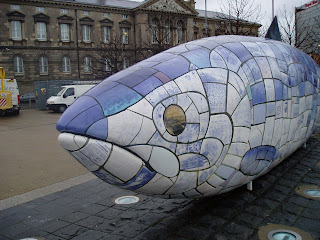 French voices are increasingly common around as we make progress towards becoming a more metropolitan place to live and work.

Although the city is quite compact and well signposted you occasionally see people consulting their maps, wondering where they should go next. It’s a particular pleasure to hear visitors speaking French and so when I overheard a group discussing which direction they should take to get to our “big fish” I decided to introduce myself.
To their obvious delight, I got them going in the right direction and walked part of the way with them, speaking French. That makes my day. I get to use the language and it is an opportunity to sustain the reputation for being friendly and welcoming.
The truth is that I don’t get to as often as I would like these days and look for ways to keep the connection strong. This francofiled blog is part of that process and so too is surfing social media to keep up to date through Facebook, Twitter and the web.
If you, like me, are interested in sharing useful information with our French friends then there are some places on the web to turn to for that kind of information. Here are some that may be useful in and around .
Staying on the tourist theme, you could check out the Tourist Board’s Discover Northern pdf guide which is available here for download in French. I like the guide because, while being already very familiar with the places it mentions, it contains plenty of key vocabulary to add to the “use it or lose it” language bank.
Another thing that strikes me about life in is the growing number of French people who are now living, studying and working here. Several of them connect on the FrenchCo, web forum. FrenchCo organises regular meetings for its members so it is worth a few moments to check for information here.
Film making is an important art form in , so it is great to see the Queens Film Theatre (QFT) continuing its long and proud tradition of bringing the very best of French cinema to audiences here. Be sure then to look up screenings of the current programme to see what is on offer.
And of course, there is our own dedicated band of Francophiles and Francophones who rendezvous each month as the Cercle Français de Belfast. The Alliance Française London supports the network of French Circles including the CFB and publishes details on its website. You might like to circle some Belfast events on the current programme.
There are of course many other ways and places to keep up to date with France and French. Please add your ideas and suggestions in the comment section where I will look forward to reading them.
Meantime, I had better sign out. Someone’s looking for a “poisson”.
Publie par Unknown - vendredi, juillet 16, 2010 Aucun commentaire: 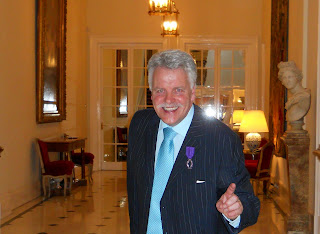 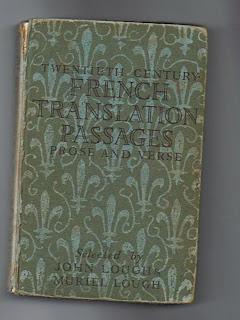 I find it hard to part with books and have several old texts from my school days. One such is a book of French Translation Passages. It dates from the late 1960s and when I found it again recently I flicked through to an extract that has come to mind several times over the years since.
I have the book beside me now, open at Passage #42, relating to the writer, Anatole France.
The extract appeals to me. In summary it refers to a charming, greying man, nearly 70 but with a young disposition. Someone whose age suited him and who in the salon preferred to give way rather than argue.
Described as a seductive speaker, drawing on literary references, he disliked stubborn, argumentative people, saying about them : - They think it is important to be right!
That sounds to me now like good role model behaviour. I wonder if I also thought that as the 17-year old translating the piece for the first time.
As I engaged in the lengthy, technical process of translation back then I wonder if those descriptions of Anatole France slipped under the radar to find a home in my unconscious mind where they continue to play their part in formulating my present day values and beliefs. A one time learning that has lasted for life.
The material for translation was selected from Rosny, JH. (1927) Mémoires de la Vie Littéraire, Crès, Paris. It has a new lease of life with an electronic makeover. My search engine has just turned it up as an e-book and I had no difficulty locating the extract on Anatole France!
The translation book, on the other hand, is showing signs of age now.
Its age suits it.
Publie par Unknown - mardi, juillet 13, 2010 1 commentaire: