This article was first posted as 24 hours in Saint Émilion on www.cerclefrancaisdebelfast.org in August 2020.  It is a follow up to a post that appeared ten years earlier on francofiled in August 2010. 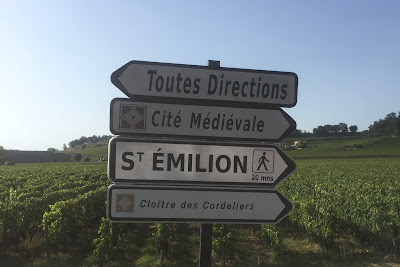 The plan to spend a night in the medieval town of Saint-Émilion was uncorked some years back. Nearly two decades ago we had been in the town and purchased a special bottle from the 1981 vintage of Château Franc-Pourret to commemorate our wedding year.

The idea, still not realised, was to crack it open at a special anniversary. It was on checking its current status for drinkability that we noted that the Château offered the opportunity to stay in the heart of the vignoble in highly rated chambre d'hôte accommodation. 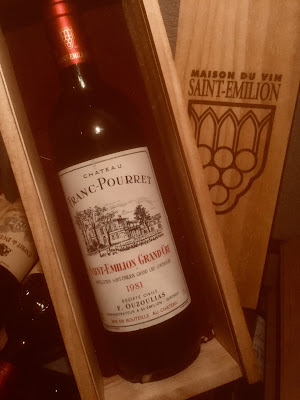 The plan developed its aroma when last September, we arranged to spend a few weeks in France starting in Bordeaux before moving in stages up to Paris.

What about the Château? Did available dates match? Could we dine there?
And importantly would we be able to bring the bottle back to its birthplace?

Contact with Madame OUZOULIAS, Catherine, was simplicity itself.  Demand was always high and yes, she had a room available for one night only – a Sunday; she offered a sumptuous breakfast but no evening meals; and while she liked the idea, she counselled against coming with the bottle of wine thinking that perhaps we had missed its apogée and might enjoy it better at home where it was already well rested! The date matched, no deposit was required and of course we booked! 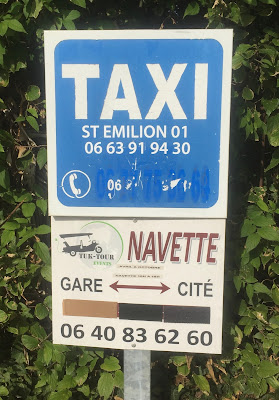 Trains from Bordeaux to Saint-Émilion are fairly frequent and it's a short journey but last summer there were major works underway at our destination, so we got out at Libourne and made the rest of the journey by coach. The station at 1,5 km is some distance out of the town, a good 20-minute walk, although you can phone a taxi or tuk-tuk service. Catherine, however, had arranged to collect us at the station and bring us to the estate.

Château Franc-Pourret was an elegant delight and we felt instantly at home. There waiting for us were a couple of half bottles of the property’s wines and one of them was a little relative of the bottle back home! We would toast our arrival later that evening but meantime there was some exploring to be done.

Catherine suggested that we make our way into the town by strolling through the vines. Our route brought us out near the imposing Tour du Roy and from there we made our way to the unforgettable 12th century Église Monolithe commanding its lovely paved square. 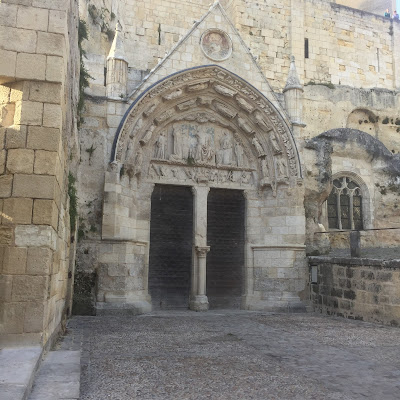 The association with Émilion started a little earlier though when in the 8th century he left his native Brittany, became a monk and ended in Ascumbas, the ancient and former name of the area. There he lived in a cave and joined by others formed a religious community. After his death in 787, a village was built in his honour and 12 centuries later the town of Saint-Émilion, its vineyards and religious sites have become a UNESCO World Heritage site. 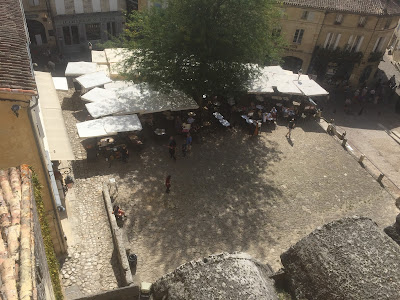 We had been in this square often before and thought we would savour the memories over a glass of pastis. After all, it was a hot afternoon. Suitably refreshed, we decided we should find somewhere for an evening meal before heading back to Franc-Pourret. Although many restaurants were closed there was plenty of choice and we opted for Chai Pascal.  Calling in, the patronne advised that they wouldn't be serving until 7pm and suggested we book a table. Done. That gave us an hour or more, so still plenty of time to sightsee.

On our rambles, and not far from the Place de L'Église Monolithe we spotted a sign for a wine merchant - The Wine Buff Experience with Paddy O’Flynn. 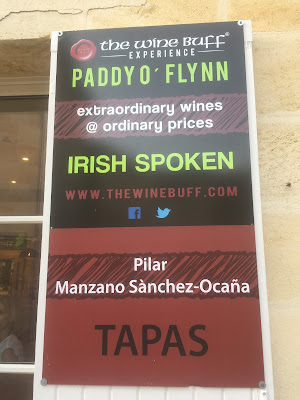 While we were looking at the sign a smiling woman, Pilar, asked us if we were Irish and invited us in to meet Paddy. We were treated to a tour of the tasting room, which seemed like a monolith itself carved out of limestone. It was wonderfully cool.

A taste of Saint-Émilion? Of course. And then a lovely chat with Paddy and Pilar about wines from the region. We arranged to call back the next day and avail of their ordering service.

The meal at Chai Pascal was delicious and we could have sat on, but we had decided to walk it back and night was falling. Not through vineyards at this hour but along the road, using the light from our mobiles to alert passing motorists of our presence. What a lovely feeling to be in wine country at night-time. Yes, that half bottle of Franc-Pourret was waiting. 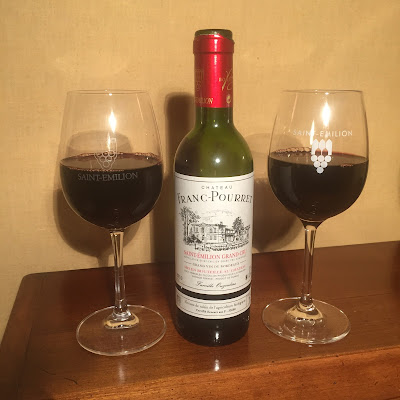 Breakfast next morning was a treat, living up to its reputation. A bowl of greengage - reine-claude plums - baked in a crust, an array of cereals, juices, fruits, croissants, homemade jams, organic yoghurt and coffee. Magnificent.

Our bus connection for the train back to Bordeaux was not until 5pm so we still had a day in Saint-Émilion. Catherine suggested we look around the estate and when our bags were packed, she would store them in her car in the shade. Then later she would come to collect us in town and take us back to the station. We readily agreed and picked as our rendezvous point the car park at the Collegiate Church. This time the stroll through the vines took a different route. Passing château after château it was like walking through a wine list and we arrived directly at our appointed rendezvous spot. Time to appreciate this lovely church and its cloister and learn a little more about Émilion. Quiet.
Then out again to the town now busy with newly arrived day trippers all making their way to the square. We spotted a shop selling macarons. 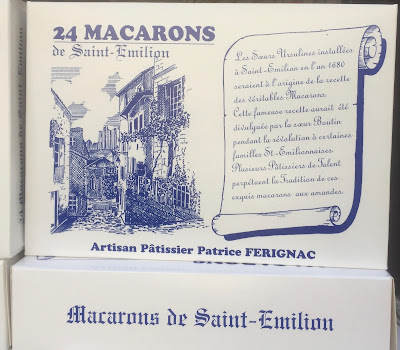 This gourmet tradition dates back to the late 1600s when the sisters of the town’s Ursuline convent confected the recipe from sweet and bitter almonds, sugar and egg whites. We bought some boxes to offer as gifts.

Another walk around the town, stopping at various points and just soaking it all in. The town has been modernised much over the years and grand hotels now bring a more international style to the spaces they occupy. Still, that medieval heart beats strong.

A light lunch? Why not? Une omelette complète filled with cheese, ham and mushroom, aided and abetted with crusty bread and helped on its way with a glass of rosé chilled to perfection.

Back to the Wine Buff, sample some wines and place an order. That's a whole other story but suffice to say that momentous events in our household are accompanied by a bottle taken from the stock ordered that day. And we are still in touch with Paddy and Pilar through social media.

Where had the day gone? Time to move and await our pickup with Catherine. We went back to the Collegiate Church where we had agreed to meet. She arrived spot on time and took us back to the station. She seemed pleased with the box of macarons as we offered our thanks and goodbyes. We would think of her often and Château Franc-Pourret will be an abiding memory.
And there is of course that bottle that remains from 1981 to be opened… sometime.

We also brought home a couple of its half-sized relations. No longer a Saint-Émilion alone in its cave.
It's got plenty of company!