Brilliant! The PARISIANER is here and well worth the wait. As explained in a previous post the project was to create a series of covers for an imaginary magazine about Paris. 100 artists were invited to take part and the result is first class. Affectionate; amusing; ascerbic; it is difficult to choose a favourite from the collection. Good then that as part of the crowd funded initiative my subscription included not just the book of covers but a print of one of them. That'll be framed before long. As for the crowd funding itself it surpassed its target. A great idea! Where next?

The next talk in the Cercle's programme will take place this Wednesday when Claudine McKeown presents her personal look at the Saint-Germain-des-Prés area of Paris, home to many renowned artists and writers. And of course, the famous church that gives the area its name.
We'll meet up at the Dark Horse Coffee House at 7.30pm in Belfast's own bohemian and artistic Cathedral quarter.
See you then?!

Last month's réunion of the Cercle français was a colourful and festive occasion. The tables of the Dark Horse Coffee House had been moved to the perimeter to leave plenty of space for dancing and the walls were draped in bleu, blanc, rouge bunting. Musicians from BalFeirste played Breton music on a variety of instruments including the bombarde. The atmosphere at this early stage of the evening was full of buzz and chat. 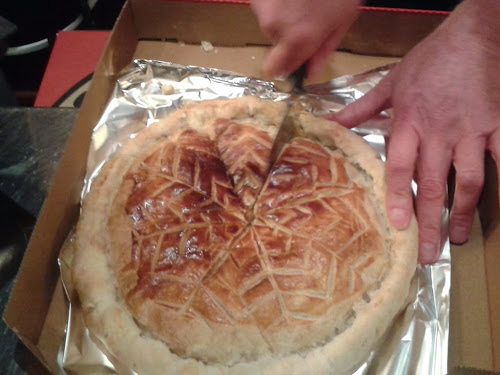 Philip McGrory lived up to the MC in his name and soon had us organised for the evening. First up, he explained was a demonstration of a gavotte. Vanessa and Fergus took to the floor, others of the troupe joined in and our evening got into its rhythm.

Following a spell of more music and chat, we were called back to order for a couple of magic tricks. Magic, Magi and the fête des rois. In a nice touch, one of the magician's tricks involved participants who were all French. He supplied them all with menus from the restaurants of famous French chefs and somehow managed to get them all to select dishes from the various menus, the cost of which added up to an amount he had previously written on an enveloped card.

Then on to the galettes, prepared by Amélie. They were délicieuses! And substantial. Each baked with a fève inside. Warned beforehand to be careful when eating, it was soon established that 4 femmes and 2 hommes were in the running to be selected queen and king for the evening. This was decided by ballot. Vive la révolution! More music and la reine and le roi took to the floor in a celebration dance.

Vanessa then distributed copies of a song and got the whole audience to sing-a-long. That finished, it was back to the floor for a demonstration of and a joining in a chapelloise. Cameras and phones flashed all around as people captured the festive fun.

It was a great evening. Thanks to all who joined in and made it possible.