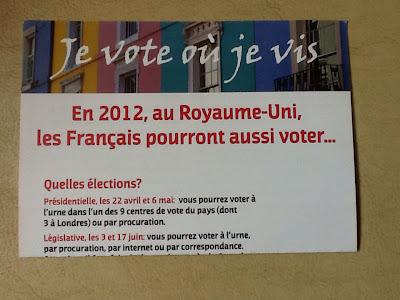 One of the parties in the French Presidential and Legislative Assembly elections brought its campaign to Belfast yesterday in the person of Parti Socialiste candidate, Axelle Lemaire. She came hoping to enlist the support of French people living here who are registered voters back home in France.
For the Presidential elections, French people can vote by proxy or using a ballot box at one of 9 centres throughout the UK. For elections to the Legislative Assembly, which take place in June they have an even greater choice being able to use: ballot box, proxy, mail and for the very first time the Internet.
Axelle explained that also for the first time, two and a half million French people living abroad would be able to elect 11 députés to represent them at the Assemblée Nationale. The constituency, La 3ème circonscription - Europe du Nord, is expansive, comprising the 10 countries of the UK, Ireland, Iceland, Denmark, Sweden, Norway, Finland, Estonia, Lithuania and Latvia. The exact number of French people living in the area is not clear and could be about 500,000 and about 80,000 are already registered voters.
We packed a lot into the short lunchtime meeting and talked about common themes among French people across Northern Europe and especially about the position of languages.
It was a pleasure to show off a little of Belfast's patrimoine, the Cathedral Quarter and its new art spaces, the City and Waterfront Halls and then a photo stop outside our newest link to our past, Titanic Belfast.
Relieved that my French had kept up with a wide range of socio-cultural and educational themes I dropped our visitor back in town to go in search of her compatriots. In a spirit of égalité I said it would be nice to meet other legislative contenders and show them around. To connect with the "constituency". After all it's not every day that a Francophile gets to hear that, for French people at least, L'Irlande du Nord is on the election trail for La 3ème circonscription - Europe du Nord.
Publie par Chris Tracey - mardi, avril 17, 2012