As was promised in my last post on Cases of Cognac to Belfast available here I added some cognac to a Belfast Crystal glass and paid a silent toast to those mentioned in the post.... 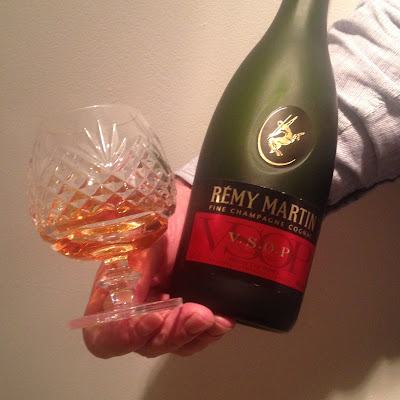 Admittedly it was with a VSOP rather than a 3* but then it is whatever's to hand. Right?
Publie par Chris Tracey - dimanche, février 26, 2017 Aucun commentaire:

Cases of Cognac to Belfast 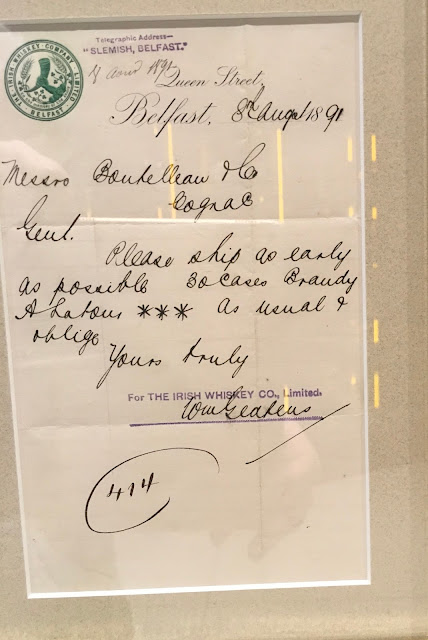 The Friend at Hand is more than just an Irish Whiskey shop in Belfast's Cathedral Quarter, it is also an emporium that houses a vast array of whiskeys and whiskey memorabilia; legacies of a bygone time which are definitely not for sale, providing instead a visible, authentic record of the many distilleries around the city in the 19th and 20th centuries.  Among the items on display was the framed telegraph request pictured above.

That evocative word - Cognac - near the top of the page caught my eye and, interest aroused, I noted the date: 8 August 1891.

1891 - This is a remarkably well preserved document but I wondered what on earth was an order for brandy doing as a display item in a whiskey store.  I set about finding out.  The telegraph as you can see was addressed to a company in Cognac.  This lead me to an internet search but my initial queries on Bouhelleau or Bonhelleau and other variants returned zero results.

The solution lay in that lovely late-19th century handwriting style.  Look closely at the words - Latour - and - truly.  That fourth character in the company name is the letter T and gives us:  Boutelleau.

Back to the search engine again and result,

as I was instantly directed to the site of the Exposition Universelle des Vins et Spiritueux (EUVS) where after entering details of age and country of residence I found some information on Boutelleau.

Why not take a quick look here ?

If you've followed that link then you'll see, not a bottle of Latour 3* but, a cognac produced by Boutelleau and Co founded in 1849.  That's some 42 years earlier than the date on the telegraphed order.  The company was based in Barbezieux in the Charente and the label displays provenance from the Union des Propriétaires de Vignobles. Another link, this time at BrandyClassics.com states that the company "sold large quantities of fine cognac and were quite well known in their time."

Clearly their fame extended beyond France to Belfast.

But why is a whiskey company buying 30 cases of brandy ?

One suggestion comes from the proprietor of The Friend at Hand - Willie Jack.
Although the order was for 30 cases, probably around 250 litres, it is possible that the quantity requested came in an oak barrel or barrels which were much prized as receptacles for equally fine whiskey. That's because oak, which is virtually leak-proof, imparts both colour and taste to the liquid it contains.  Could be.
But one or even two barrels ?  Is it possible that the writer meant casks but wrote cases?

The order is very clear about the brandy required, the A. Latour 3*.  Could that be significant?
And then there's that quaint term: As usual and oblige.  This is a frequent order then. But how frequent?  Enough to have a regular supply of barrels or casks?

But if they are making that order repeatedly what what would have happened to the brandy?
Given the old adage of never mixing the grain and the grape it is unlikely that it was added to a blend.
Whiskey and brandy are both made in pot-stills, could that be a connection?
Or did the Irish Whiskey Company simply have an outlet for the brandy?

I'll be thinking about those questions, perhaps not too much, when I next sip a 3* VS.
And just as the whiskey went into brandy casks, my cognac will have been carefully poured into its own receptacle of fine, cut-glass Belfast crystal.

And I'll raise that glass to the memory of M. Boutelleau and the representative of the Irish Whiskey Company Belfast who way back then in 1891 were doing their frequent and entrepreneurial best to connect Cognac and Belfast.

And in that spirit, I'll keep that connection going.