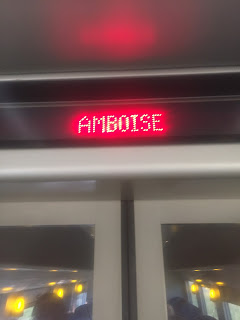 This was supposed to be a leisurely trip to Amboise.  An ambling ambition.  The idea was that we would get a late morning train for Amboise and visit the château. Its within easy reach of Tours where we were staying and that leisure time would include a snack at the Mie Caline outlet close to the station.  Sure enough wrapped around a bacon and cheddar filled baguette everything seems to be going swimmingly.

As often before on this trip, I had used the very useful OUI.sncf app to buy two tickets, located the train and boarded with ease.

The train was quiet and comfortable and tempted with the strong wifi I got involved in some catch-up messaging. Mistake!

Starting to feel drowsy, I closed my eyes.

Yes, I had been aware that the train had stopped but since it seemed we had only just left I paid no attention.  Rousing a little later P. remarked that she had seen a château en passant and I figured perhaps that was Chenonceau.  However looking at the time I realised it was later than I had thought and the train station had been Amboise!!

A quick walk up the train - to find the conductor who turned out to be extra-specially nice.  He confirmed that we had indeed missed Amboise and were now approaching Blois-Chambord.  If we were quick, he suggested, we could get out and take the next train back in the Tours direction which was due shortly.  Offering to pay any supplement due, the conductor declined and added the comment that if asked I should simply explain again as I had done to him.

We did, descended at Blois-Chambord, and after that rush of adrenaline caught the next train back a few moments later. 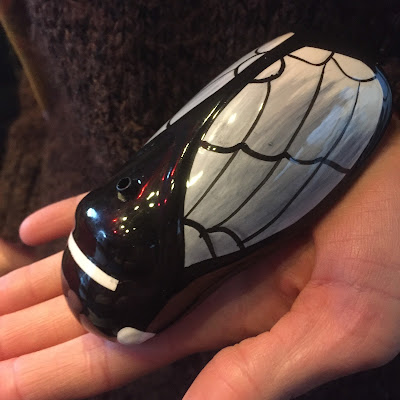 Want one of these! A mechanical cicada that makes that nostalgic sound characteristic of warm summer evenings in the south of France.
It's available online and I've just placed an order. This, some bright lights, a bunch of lavender and a glass of pastis...winter will be that little bit shorter.
Publie par Chris Tracey - mercredi, février 12, 2020 Aucun commentaire: Liens vers cet article