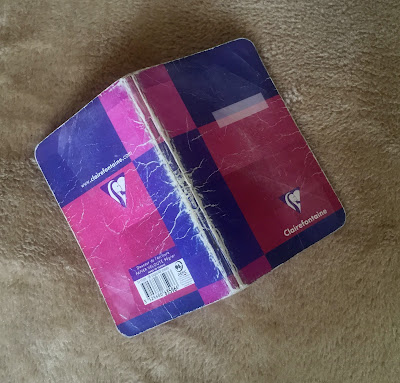 My little battered Clairefontaine carnet definitely stood the test of time but now all of its pages are used up.

It was a delight to use as the pen just seemed to glide over its weight of paper with virtually no "bleedthrough" of ink.

Bleedthrough? That means that each of the 96 pages, made from 48 sheets of doubled and stapled paper, could be fully used with no ghosting of writing showing through from the other side of the page.  I hate it when that happens; I like each new page to be pristine.

Douceur de l'écriture  - Papier velouté - are the marketing descriptions for the product and the paper does have that soft, velvety touch that makes writing a pleasure especially with a fountain pen.

Looking through it now and checking the items noted there the thing that strikes me is just how serviceable it was - contact details, numbers and emails; flight references and booking codes; quotes and books to read; meeting plans, agenda and follow-ups; vocabulary items and even diary style entries in appreciation of a nice meal or restaurant.

Clearly it travelled a lot so perhaps that had to do with its portability, the compact size making it convenient to carry.

It has a larger sibling which is part of Clairefontaine's 1951 Retour aux sources (back to basics) series. I use that one for a different purpose and it's not a daily carry round. I keep it for taking notes on French talks I've attended or drafts of blogposts and with squared pages it's very French... 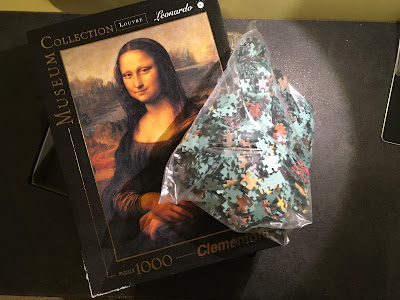 Yes this puzzle brings back a memory and makes me smile.
I did it once before - although that's not strictly true as in a sense I didn't quite complete it, someone else did.

It was back in 1974 and I was living then in Vierzon, renting a room from a propriétaire on the outskirts of the town. There wasn't much to do in the evenings and one way of passing the time I decided was to tackle a jigsaw.  A good sized one mind you, at least 1000 pieces.

Thanks to the local librairie I was able to to get a puzzle of La Joconde, Leonardo Da Vinci's Mona Lisa and it turned out to be a labour of love. I hadn't at that stage seen the original in the Louvre and when I did it struck me as smaller than I expected.  All the same I got to know those brush strokes fairly well and the background?  Well there's a lot of detail there too.  Jigsaws are a great way to appreciate a work of art.

And as for the smile?  Getting there.

My efforts with the puzzle were a great source of conversation with my landlady who remarked progress on a daily basis.  She commented the knowing approval of the femme de ménage as she observed the work move to completion.

After many painstaking hours over several evenings there remained one piece.  I am sure that it was a portion of the nose.  I decided that I wouldn't snap it into place and instead left it to the side.

It stayed there for quite a while until one day Madame La Propriétaire met me at the doorway on my return home. Monsieur Christopher should know that the femme de ménage could restrain herself no longer and felt moved to insert the remaining piece! Apologies all round but the poor lady was clearly  exasperated to see the puzzle completed.

I hadn't left the piece out to bother anyone and it wasn't bothering me. Patience is a virtue, found in no man but in every woman except of course for the femme de ménage.

The incident made me smile then and still does.

So here I am again, nearly 45 years on with a new version of the puzzle.  1000 pieces.
Time to get reacquainted with a masterpiece.

Will I leave out a piece to be inserted by someone checking my progress?

Of course I will. Serves them right for being nosey.
Publie par Chris Tracey - lundi, avril 06, 2020 Aucun commentaire: