It was a talk that we had wanted to do for a long time at our French Circle, le Cercle français de Belfast.  And so it was that around twenty of us braved the inclement February weather and settled in the warmth of the Dark Horse Coffee House as Claudine McKeown presented her personal look at the Saint-Germain-des-Prés area of Paris, home to many renowned artists and writers and as we were to hear to Claudine herself in her student days

Claudine, ably assisted by husband Seamus in managing the technology, explained that her talk would be in French, supported by PowerPoint slides in English.  This approach found favour with many present.

She started by locating the area geographically in Paris, highlighting some of the key landmarks of the 6th arrondissement. Claudine then focussed on the construction of the Abbey church in some fields outside the not yet then expanded Paris. The abbey and the fields explain the name.  The church, she told us, reinforcing the point with a slide, is also the final resting place of René Descartes, philosopher, writer and mathematician.

On to history, and we were treated to pictures of and comments on various places that make up the patrimoine of the area.  Here was the church of Sainte Sulpice, here La Sorbonne where Claudine as a student met up with her future husband and here the Luxembourg. Bright, sunny images a welcome counterpoint to the weather outside!

Sitting in a café, it was especially interesting to note how the talk progressed to café culture at its best by including brief, personal accounts of four famous cafés in the area: Le Procope, Brasserie Lipp, Café de Flore and Les Deux Magots and the writers and artists who frequented them.  We had spent a lovely week in the area a few years ago and revisited a while back to enjoy a lunch on the terrasse of Les Deux Magots. That's me over on the right deciding what to order and just below is the decision, a delicious selection of cheese. 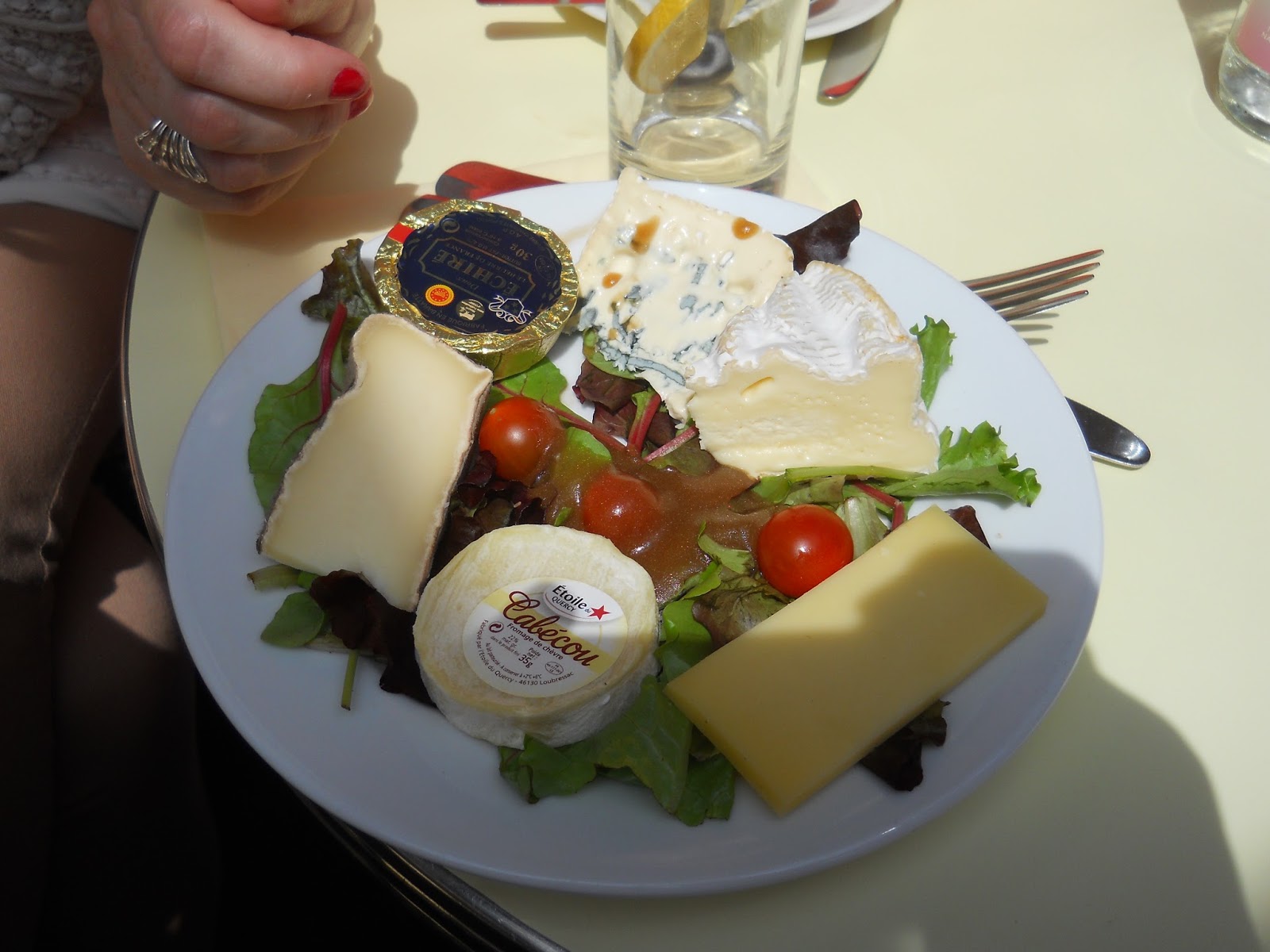 Back to the talk in which Claudine shared a memoir of a once exasperated owner of the Cafe Flore and later friend of Jean-Paul Sartre and Simone de Beauvoir. The cafe owner recounted how the couple had developed the habit of coming to the café and sitting all day over a single cup of coffee.  Warmer than their nearby flat, the café became the meeting place for discussions with their many friends and followers and for countless others who have since then made the literary/philosphical journey to the quarter.  Nice that the couple are remembered by the naming of a square after them.

Music was next on the tour and with the help of a series of posters and short videos we learnt how the area had danced through the post-war years.  Music was our final stop and what better tribute to end on than Juliette Gréco's rendition of Claudine and Seamus's favourite (mine too) French song, Guy Béart's Il n'y a plus d'après ( À Saint-Germain-des-Prés).