"Make sure," advised the museum art curator, "to always buy the catalogue of important art exhibitions you attend." She explained that a great deal of time and effort would have gone into bringing the various items together from different collections or galleries around the world. It would be fairly certain that those pictures would never again be together in the same exhibition.

Since that talk to our French Cercle around 15 years ago I've heeded her advice as often as interest and wallet would allow. Pity I wasn't aware of her good counsel for one exhibition I attended when I had just turned 20 and when such advice was beyond my maturity.  Still, that exhibition left an indelible mark and an enduring appreciation.

It was 1971 in Bordeaux on a free day away from summer camp duties as moniteurs a group of us visited the Galerie des Beaux-Arts which was hosting an exhibition on Surréalisme. We recognised of course some of the artists' names such as Salvador Dali and Pablo Picasso and were introduced to René Magritte but it was the effect of those paintings that left the indelible mark.

Two in particular.  One a large picture of the Madonna spanking her child over her knees, a halo lying on the ground and three men looking at the scene through a small window.  The other was of Saint Anthony being tempted, pursued by ominous clouds and sensual demons.

Of course I didn't take the details of the artists at the time much less buying a catalogue. Nor did I take the titles of the works.  But decades later and having heard the art curator's advice I thought it would be interesting to track down those images.

Where to begin? Books on Surrealist art naturally and internet search engines. It was amazing and daunting to see just how many times Saint Anthony was tempted. Poor chap! And as for the Madonna and Child?  Une aiguille dans une botte de foin - a needle in a haystack.

What about checking the site of the Gallerie des Beaux-Arts in Bordeaux? Yes, some interesting pointers but then a moment of inspiration. If the art curator was right and the done thing was to purchase an exhibition catalogue then maybe there would be a copy online. I knew exactly where and when the exhibition took place, Bordeaux 1971 and it was worth a try.

Surreal ! There it was - a catalogue for sale from Galerie Artima in Paris. 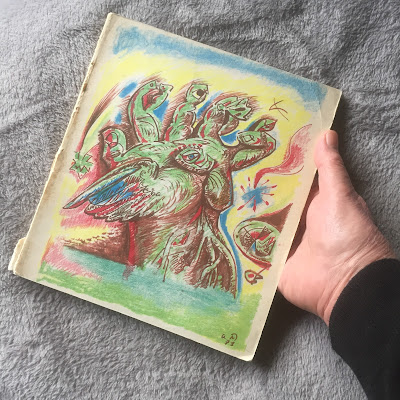 The exhibition catalogue all the way back from the past. It's in a remarkably good state, with wear mostly on the spine.  A colourful cover, La main fertile by André MASSON designed specially for the exhibition  and with mostly black and white pictures inside.

The curator was definitely right - the provenance of the artworks from individual collections and galleries was widespread: Anvers, Bâle, Bandol, Bordeaux, Bruxelles, Charleroi, Dortmund, Gand, Genève, Hambourg, Helsinki, Ixelles, Knokke-Le Zoute, Londres, Limoges, Marseille, Nantes, Neuilly-sur-Seine, New York, Paris, Prague, Saint-Denis, Seillans and Strasbourg. That must have been some task; a labour of love to reach out and coordinate all those places over several months, if not years. Confirmation that those pictures were most unlikely to ever be under the same roof again.

But at least now I had the catalogue!

Sure enough, one of the colour plates was Item #96 Max Ernst's La Vierge corrigeant l'enfant Jésus painted in 1926. Its dimensions were recorded as 196 x 130 cms and was contributed by Mme Jean KREBS, Bruxelles.

Saint Anthony was there too.  The sensual horror of the scene muted by its reproduction as a small black and white image. It's La Tentation de Saint Antoine by Dorothea Tanning. Item #221, it was painted in 1945 - 46 with dimensions 121,5 x 91 cms.  So smaller than the Max Ernst but large in my memory. It was supplied by the Galerie François PETIT in Paris.

Those two pictures, separated by 20 years in their production, were not only connected in my memory but it turns out that their artists were also connected.  In a biographical note the catalogue records that Max Ernst went to the United States in 1941, staying there for twelve years.  While there, he connects with American, Dorothea Tanning and they marry.

Where are they now?

So nearly 50 years on, where are the pictures now?  Well, I've spent some fascinatingly, fruitful hours tracking them down and meeting other great pictures that they have created on the way.

The Max Ernst now hangs in Museum Ludwig in Köln while the Dorothea Tanning is in La Salle University Art Museum, Philadelphia.  So together in Bordeaux in 1971 and today continents apart - that art curator knew what she was talking about.

I have become quite a fan of Dorothea Tanning who lived to over 100 years of age from 1910 to 2012 and who in her later life became a novelist and a fine poet.

But what if a reader wanted to know more about those artists and pictures?

Well I was coming to that...

These links should help:

Spend a while at the Museum Ludwig in Köln for Max Ernst and then spend 5 minutes with Dorothea Tanning with superb commentary on the Temptation of Saint Anthony by Impressionist and Modern Art specialist Vanessa Fusco of Christies art auctions whose New York house managed the sale of the picture back in 2018 for well over $1,000,000. And you can read there too about the art prize in which the winning picture of Saint Anthony being tempted in the desert would be featured in the 1947 film of The Private Affairs of Bel Ami based on the Maupassant short story.  Dorothea's Anthony didn't win but Max's Anthony did and just as in my catalogue his picture is presented in colour in an otherwise black and white film.

Hope you enjoy.  I would love to know what you think.

And if I could leave you with a piece of advice?

When you are next at a major exhibition, don't be tempted not to, BUY the catalogue! 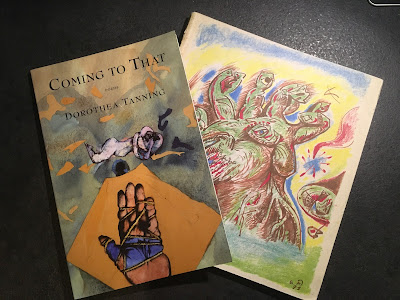