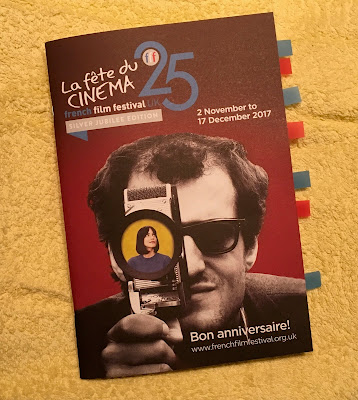 Leaving the Queens Film Theatre Belfast today I picked up a very impressive programme for the UK French Film Festival 2017.  Although QFT isn't showing all the films being screened during the festival it is showing seven listed below.

The Festival is celebrating its 25th anniversary and the silver jubilee edition of the programme has been extremely well produced and worth keeping as a souvenir reference guide. As a francophile and a francophone it's great to see the number of films showing and the range of cinemas taking part.  The programme contains an at-a-glance guide to what's on and where.  The films are helpfully cross-referenced to blurbs on the content and as well as offering contemporary films, the programme contains several classics.

Check out the full listings over at www.frenchfilmfestival.org.uk meanwhile here is the list of seven films showing at QFT:

Some of the screenings are evening, matinee and weekend so it's best to check out QFT's own listings available in its programme and online at www.queensfilmtheatre.com

Although I've viewed films back-to-back many times, I've not watched quite so many on a daily basis before.  However, I'm making an old year's resolution to see all of them!