The Story of Grand Marnier 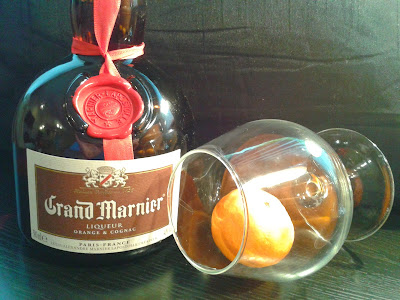 There was a good crowd at the latest event in this year's programme from the Cercle français de Belfast  when "yours truly" gave the talk on Grand Marnier.  As usual the Dark Horse Coffee House in the Cathedral Quarter matched the proceedings perfectly.
I decided that it might be a fun idea to do a kind of Who Do You Think You Are? approach to the subject.  The concept of the popular BBC ancestry programme has made it into French, in Canada at least, where it is known as Qui Êtes-vous?
The first part of the enquiry then looked into the origins of the drink and focussed on Jean-Baptiste LAPOSTOLLE who, in 1827, set up a distillery to make fruit liqueurs in Neauphle-le-Chateau near Paris.  The story moved to his son Eugene who returned from travels with bottles of "burnt wine" - brandewijn - from the Cognac region.  He is said to have offered a taste to his friend Louis-Alexandre MARNIER who hit upon the idea of adding his recipe for bitter orange curaçao to the cognac.  A perfect marriage.
Louis-Alexandre joined forces with the LAPOSTOLLE family business and also married Eugene's daughter Julia Regina.  The alliance of Marnier-Lapostolle is still confirmed by the red seal and ribbon on bottles of Grand Marnier Cordon Rouge as you can see from the above picture.
At the time of the Paris Exposition Universelle in 1889, the drink was still referred to as Curacao Marnier, that was until Louis-Alexandre's friend César RITZ brought his marketing skills to bear.  As someone who could spot a quality product likely to appeal to the rich and famous he prompted Louis-Alexandre to rename it Grand Marnier.  The "grand" prefix went against the trend of the time in referring to things as "petit" - Le Petit Journal, Le Petit Parisien, Le Petit Palais etc.  It caught on, quickly adopted by a well-to-do clientele.  Among these was the then Prince of Wales, Bertie, who went on to become Edward VII and who would have a considerable part to play in the building of the Entente Cordiale.
Our story took a brief aside to look at the career of César RITZ and his colleague Auguste ESCOFFIER.  There followed an appreciation of Crêpe Suzette with different suggestions as to how that dish originated and indeed how it is made.
We later considered how helpful Louis-Alexandre was to Ritz in helping him acquire premises in place Vendome to set up the famous Paris Ritz hotel.
The evening wouldn't have been complete without une dégustation and soupçons of Cordon Rouge were passed round for a sniff or taste.  That provided an opportunity to look at some contemporary marketing of the product including a video on mixing a long drink cocktail.
Members were delighted to see examples of some of the specialist bottles produced by the company and the blue bottle of 2012 depicting the Parisian Skyline was a hit!
One of the members, Sandra, had brought along her bottle - in case it was needed -  and we had a little more fun deciphering the number code on the bottle neck.

The first two digits indicate the year, in our case '13; the next three the day number of the year, so the 15th day of the year is 15 January and the last two digits show the hour in which it was bottled, in our case after 16h.00 and before 17h.00
Try this next time you pick up a bottle. It turns out that Sandra's Grand Marnier was in the bottle at 10h.00 that same day! Older!


Of course, we covered plenty more.  Members talked about how they preferred it as a straight liqueur, no ice or how they used it in cooking.  Some said that they had a bottle at home and knew precisely what they would be doing when they got back after the talk. Do you know we had exactly the same idea?

Questions
Were you there?  Anything you would like to add? What liqueur should we talk about next year? Bénédictine perhaps?