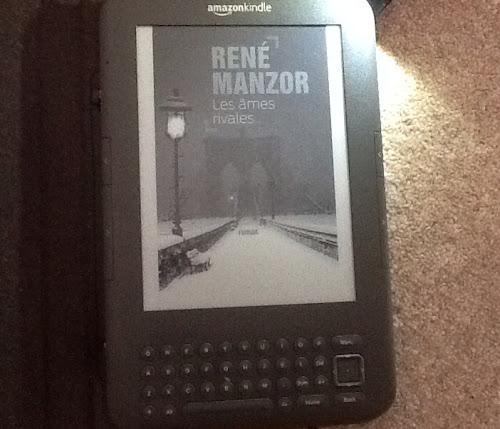 I've been using my Kindle reading device for over a year now. Although I love books I am not one of those readers who refuses to have anything to do with the electronic variety. One of the things I thought I would do when I was given the Kindle would be to use it to download French books. A year ago that wasn't so easy because there appeared to be some restrictions on buying from the www.amazon.fr store. Usually there was a message in French to say that the title was not available for your country and that the site was for use by people in France, Belgium and Luxembourg.

People I knew had the same experience and others around the world reported something similar online.

Sure enough yesterday I visited Amazon France to see what if anything was available, determined that if there was no Kindle availability I'd opt for a hard copy. There was the message on the Kindle store, "Ce titre n'est pas disponible pour votre pays."

Now, the title yesterday was a top seller and i was keen to get it. Before opting for the hard copy which presented no problems for ordering, I wondered what would happen if I added the title into my main account. I did and it turned up. Moments later, I downloaded it and began reading.

A fluke? No. I decided to try some titles further down the list and some older books. Same result. Not available for purchase from France but downloadable locally. So now I'll be able to get speedy access to current French texts and authors. That should help pass bus or train journeys for the next while.

Meantime, I'm off to track down and install a French e-dictionary to fully assimilate those new words and phrases. I know I'm a fan of both formats but a Kindle in one pocket and an Oxford-Hachette in the other doesn't light it for me.